The first essay introduced the brain’s five major functional units, focusing particularly on the reticular system.  This essay is about the cerebellum, and Essay 3 is about the other three divisions. 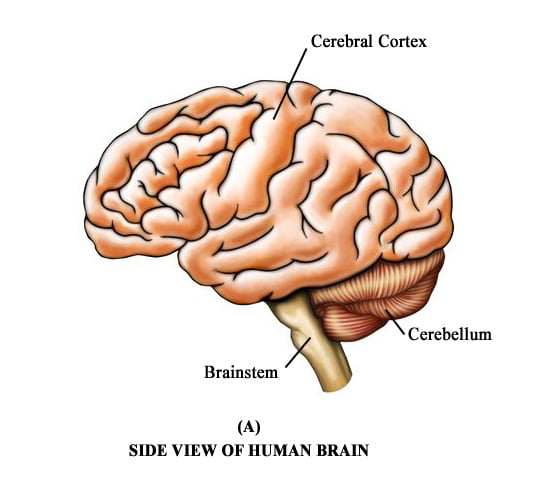 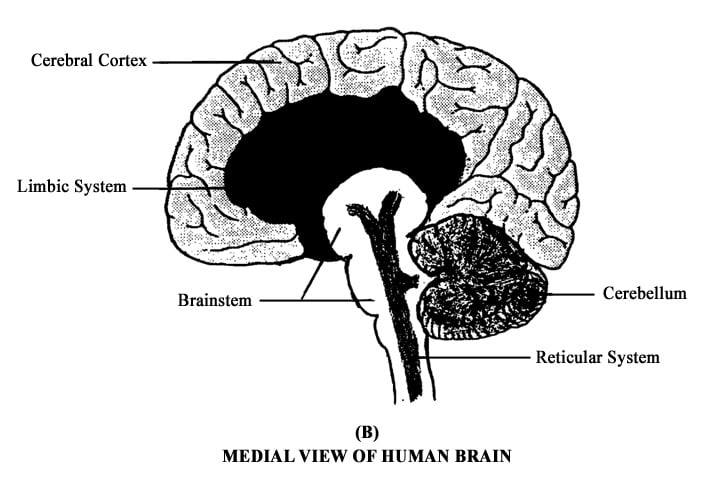 “The cerebellum,” say neurophysiologists C. Ghez and S. Fahn, “is one of the most interesting structures in the [brain]. First… it contains more than half of all the neurons in the brain!”

More than half?  Estimates of the number of neurons in the brain vary, but most put it at about 100 billion, with about 60 billion of them tightly packed into the cerebellum.  That gives it tremendous processing power, even more than the cerebral cortex.  Ghez and Fahn continue:

“Second, it has a highly regular structure… an almost crystalline organization… [which] suggests that all areas of the cerebellum perform a set of similar functions.”

That “set of similar functions” is balance, coordination, and integration of processing in other brain systems.  The cerebellum is best known for its influence on motor systems  –  balancing the body, coordinating its movements, and integrating them into unified behavior patterns.  But it has similar influences on all brain systems.  Sensory, visceral, emotional, and cognitive functions are also balanced and integrated by the cerebellum.  With over half of the brain’s neurons, and strong connections with all brain regions, its influences are powerful.

The cerebellum is sometimes described as a servomechanism  –  an engineering term for a secondary control system that keeps a larger system in balance and functioning smoothly.

“While the cerebellum itself directs no body functions, it operates as monitor and coordinator of the brain’s other centers…In engineering parlance, it is the control box in the [brain’s] feedback circuitry…an accessory control system…One is tempted to see the cerebellum as the great ‘modulator’ of nervous function.”

In layman’s parlance, it’s the brain’s balance system.  Interconnected with all other systems, it balances, coordinates, and integrates their functions.

The cerebellum has long been known to balance the body and coordinate its movements.  It receives strong input from inner ear balance sensors and from motor systems on all brain levels.  It promotes stable body posture and smooth, integrated movement patterns.  The cerebellum doesn’t initiate action;  it balances and coordinates actions initiated in other systems.

The elegant balance of a tightrope walker.  The graceful movements of an athlete or dancer.  The fine motor dexterity of a violinist or surgeon.  Keeping your balance while riding a bike, or while standing on one foot.  These highlight the cerebellum’s influence on motor functions.  But the cerebellum is always active, balancing the body and coordinating its movements throughout daily life.

For years that was considered its only function.    The cerebellum was viewed almost exclusively as a “motor modulator.”  For various reasons (see Notes), its  non-motor functions – sensory, visceral, emotional, and cognitive – went largely unrecognized.

In recent decades that has changed.  The cerebellum’s balancing and integrating influences extend throughout the brain, to all brain functions, and are now the focus of intensive research.  The motor modulator is increasingly seen as the  “great modulator” or “master integrator” of all brain functions.  It promotes physical and mental balance.

Damage to the cerebellum (e.g., from strokes or trauma) causes loss of balance and uncoordinated movements.  Patients can still perform goal-directed actions, but they are staggering, jerky, and clumsy.  And it’s now clear that cerebellar lesions cause similar problems with non-motor functions.

“Poor mental coordination” is a loose term describing a wide range of psychological changes in such patients.  There may be problems with sensory integration, such as disorientation or poor hand-eye coordination.  Emotions may be imbalanced  –  over-reactive, blunted, or inappropriate.  Cognitive functions including language, abstract thinking, and judgment may be similarly impaired.

Again, in addition to its motor modulation, the cerebellum also modulates sensory, visceral, emotional, and cognitive functions.  Various research methods provide support for this “great modulator” or “master integrator” role.  Keeping this short and simple, we won’t review that research here.  But even a brief internet search, such as “cerebellar psychological functions,” provides many examples.  It’s increasingly clear that the cerebellum balances mental as well as motor functions. 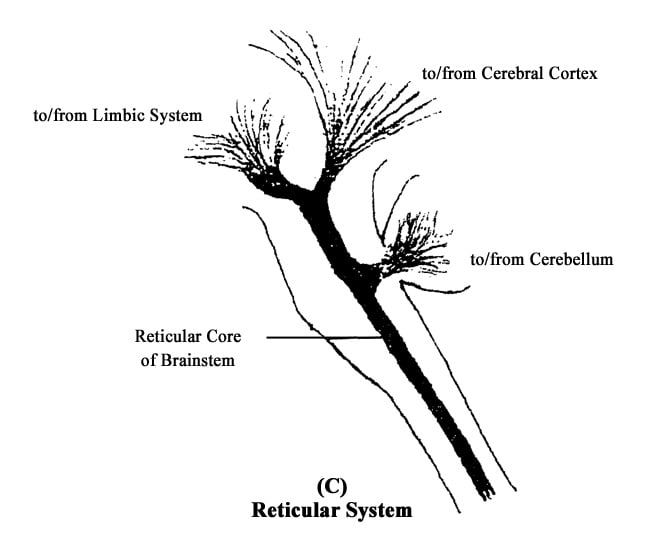 In humans, our newest cerebellar division is much larger than in any other animal.  It evolved with our cerebral cortex, and connects with all cortical areas, including those involved in thinking or cognition.  It is widely assumed to play a role in “cognitive coordination.”  For example, neuropsychologist Henrietta Leiner suggested it may “coordinate mental dexterity” and promote “the skillful manipulation of ideas.”  Neurologist Jeremy Schmahmann suggests it functions as an “oscillation dampener” to modulate and “smooth out performance” in cognition as well as movement.

Neuropsychologist Leonard Koziol also urges greater attention to the cerebellum’s role in cognition.  He criticizes the conventional “corticocentric” view of cognition.  Of course, he says, the cerebral cortex is important  –  it initiates and directs our thinking.  But the cerebellum modulates that thinking, presumably balancing and integrating it.  Koziol asserts  “the simplistic idea that equates the advancement of cognitive skill”  with the cortex alone  “needs to be reconsidered.”  The human cortex and new cerebellum  –  two large, uniquely human brain  regions  –  evolved in parallel and operate together, he says, as a “functional ensemble.”

Our knowledge of the cerebellum’s psychological functions is still limited.  We have a fair understanding of its motor influences, and we know its psychological influences must be similar.  But what exactly is “emotional balance”?   Or “cognitive coordination”?   Just how does the cerebellum contribute to mental stability?  To personality integration or integrity?

It’s obviously important in all these areas, but the picture isn’t quite clear yet  –

“It is likely that future research into the role of the cerebellum will confirm [that] just as the cerebellum maintains balance, integration, and stability in the somatic motor sphere, it may also help with balancing, integrating, and stabilizing other functions of the brain of particular relevance to psychiatry.”

Future research on the cerebellum will be relevant to psychiatry  —  and to anyone seeking a better understanding of human nature.  As one science writer put it, “the cerebellum is finally being given the spotlight it deserves.”

Again, the cerebellum contains over half of the brain’s neurons.  It does have the processing power to be a master integrating system.  It coordinates reticular, brainstem, limbic, and cortical functions, and probably helps integrate them into a smoothly functioning whole.  It probably promotes all kinds of physical and mental balance.

More on mental balance and personality integration in Essays 4 and 5.

Page 2 – The cerebellum’s motor influences have been well-known for over a century.  So why did its psychological influences go unrecognized for so long?

First, our earliest knowledge about brain functions came from brain lesions, and with cerebellar lesions motor abnormalities (imbalance, poor coordination) were most obvious.  The psychological abnormalities were more subtle and easily overlooked.  Often psychological symptoms were mistakenly attributed to non-cerebellar brain lesions, or explained away as normal emotional responses to the underlying illness.

Also, the immense number of cerebellar neurons, and their uniform organization throughout, give it great redundancy, with at least partial recovery of function after a lesion. Other parts of the cerebellum quickly compensate for the impaired cerebellar functions.  This occurs with both motor and psychological symptoms. It undoubtedly contributed to the delay in recognizing cerebellar psychological functions.